A Samnali village in the Black Eel Valley

The Wheels (also called the Samnali) are one of the three major cultures in Ride Like The Wind, alongside the Riders and Rams. They are named after their use of chariots. Some Wheel clans are among your neighbors in the Black Eel Valley, while others have established a kingdom in the north, Naztalvan.

The Wheels are descendants of Dara Happans associated with Samnal, who attempted to steal the secrets of riding from Hyalor. They keep horses, but cannot ride them, and instead use them to pull chariots. Their chief gods are Elmal, the God of the Sun, and Nyalda, the Goddess of the Earth. They despise the worship of Hyalor and consider it blasphemous - on occasion, they will gouge out the eyes of Hyalorings as punishment for worshiping a man as if he were a god. They are also suspicious of spirits, and have no shamans amnong them.

The Wheels are authoritarian and patriarchal. Women are not allowed to serve as warriors or in leadership positions, and all Wheel clans practice slavery. They are known to regard other cultures with contempt and still see themselves as noble elites,

The Former Wheel has particular insight into the Wheels and their ways.

The Wheels appear often in Ride Like the Wind, but the following events focus on them especially:

As a fairly similar culture, the Wheels—including the Northern Wheels, who do sometimes attack you—will often accept your parley offers.

The Wheels can use the unique combat ritual Wheel of Fire, which wreathes the wheels of their chariots in flame.

A meeting between important Wheels.

The fire cage, a method of execution practiced by Wheels.

Angry Wheel envoys. Note the unicorn armor on some of their horses!

A ride-by, the Wheel equivalent to a Whooping Run.

Wheels sing a mocking song.
Add a photo to this gallery 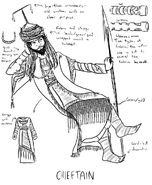 Concept art of a Wheel chieftain, by Marguerite Dabaie.

Concept art of a charioteer—a woman, as Wheel sexism was apparently decided on a bit later in the process!

Concept art of a Wheel woman.

Concept art of a shaman—in the finished game, the Wheels have none.
Add a photo to this gallery
Retrieved from "https://sixages.fandom.com/wiki/Wheels?oldid=8232"
Community content is available under CC-BY-SA unless otherwise noted.