Edit
watch 01:36
We're Getting Mutants in the MCU - The Loop
Do you like this video?
Play Sound

The Weeders are a group of people who live on the Black Eel River. They are poor and lack warriors to defend them, but their shamans are able to call spirits and monsters to protect them and attack their enemies. And they seem better able to feed themselves in these times than the valley's farming peoples.

If your ancestral enemy is the forces of Water, your ancestors will expect you to antagonize the Weeders when you have a chance to do so.

They appear in the following events:

Additionally, they are linked to these events:

The Glorantha wiki doesn't have much to say about the Weeders, but it has a few more details about the Nogatendites, who may be the same group.

Concept art of a Storm Age Weeder woman, by Marguerite Dabaie. The goddess (or powerful spirit?) Mother Loon isn't mentioned in the game. 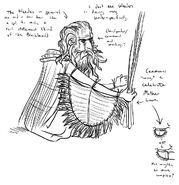