Edit
watch 01:36
We're Getting Mutants in the MCU - The Loop
Do you like this video?
Play Sound

A Hyaloring village in the Black Eel Valley

The Riders (also called the Hyalorings) are one of the three major cultures in Ride Like The Wind, alongside the Rams and the Wheels. They are named for their mastery of horseback riding. The Rider clans in the Valley are found exclusively on the north bank of the Black Eel River. The player’s clan always belongs to the Rider culture.

The Riders are descended from Dara Happan nobles of the city of Nivorah who learned the secrets of horseback riding from Hyalor, then later followed him into exile rather than remain under the Ice Dome. Their chief deities are Elmal, the God of the Sun, and Nyalda, the Goddess of the Earth. They also worship Hyalor and Gamari, the Horse Goddess. They also associate with Shamans, whose magic allows them to call upon the aid of spirits. Because Hyalor emphasized the importance of changing when necessary, the Riders hold less strictly to Nivoran custom than their Wheel cousins. In addition to their adoption of shamanic magic, they are also notably more egalitarian than their ancestors: though they still have nobles and commoners, all elders hold authority, and men and women are roughly equal.

Each Rider clan is divided into seven families, each of which consists of nobles, commoners, and elders who arbitrate disputes. Married women join their husbands' families. Ideally, each family holds one seat on the Clan Circle. Rider law is based largely around property rights. If a dispute can't be resolved by three elders from uninvolved families, it's up to the circle to resolve it.

Most Rider clans raise horses, cows, and goats, and farm barley. A few clans follow “Pure Horse” practices and refuse to raise animals other than horses, forcing them to rely on slaves to tend their crops. Apart from Pure Horse clans, no Rider clan practices slavery, but some are willing to sell captives taken in war to cultures that do.

Riders are forbidden from marriage or intercourse with Rams under any circumstances. This law ultimately stems from a belief that all children of a Ram and a Rider are destined to become evil sorcerers.

When not at war, a Rider clan may attempt to intimidate another by whooping at them - sending a troop of cavalry to gallop around the other clan’s settlement shouting war cries. The traditional response is for the targeted clan to attempt to show their strength by stoically ignoring the whoops.

The player clan has access to three (sometimes four) combat rituals: Battle Glow, Firehoof, Strongbow, and (only against Rams, and only if they are your ancestral foe) Fight in Formation. Against you, fellow Riders will use only Firehoof and Strongbow.

Riders field more auxiliaries (women who urge on the combatants and heal the wounded) than other human cultures.

Riders trying to intimidate a neighbor.

Priestesses of Erissa, goddess of healing.

Priests of Hyalor, not in a good mood.

The clan's spirit rocks, surrounded by a flack of ravens.

A Rider clan embarks on a Gods War ritual.

The section of a Rider clan's Story Tent depicting the exodus from Nivorah.

The Pure Horse Clan, Riders who refuse to keep animals other than horses, claiming this helps their magic.

Members of a wandering Rider clan.

Whooping runs are a Rider custom allowing clans to intimidate each other (or fail to do so) while hopefully avoiding bloodshed.

Concept art of a Rider man (and Rider hats) by Marguerite Dabaie.

Concept art of two herders—note the detail about belts! 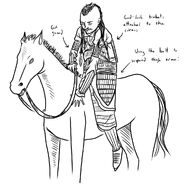 Concept art of a Rider man. The thigh armor suspended from his belt is something that appears several times in the finished game.

Concept art of a Rider woman. Again, note the belt! And her horse mane hairstyle is fairly common in the game. 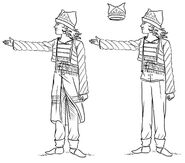 Concept art of a Rider warrior. 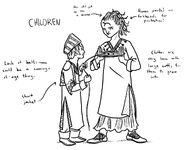